The following writing is loosely based on, “What to the Slave Is the Fourth of July?” by Frederick Douglass

Excuse me white people, let’s be real for a moment. What exactly does YOUR Independence Day have to do with black people? Were the lofty principles of personal and political freedom and justice, written in the Declaration of Independence, extended to our ancestors? So, are we supposed to feel all warm, fuzzy and reflective and talk about how great things have been for us over the past 400 years, when we’ve only been allowed to enjoy much of that for only the past 50 years of that time? Are we expected to show gratitude for the 200+ years of slavery our ancestors endured, or the massacres brought upon them by domestic terrorist organizations  such as the Klu Klux Klan, even after the Emanicaption Proclomation was enacted and which still occurs even today? Or, how about the bloody Civil Rights Movement of the 1950’s and 1960’s? Or, maybe the murders of our people at the hands of the police which occur on a regular basis in the present?

Your patriotic anniversary doesn’t involve black people, who were forced to fight in your wars and even volunteered to fight, only to still be treated as second class citizens. We returned from fighting your wars and were valued and respected less than a dog! Your current fight to retain monuments in honor of those from your past who sought to keep our ancestors enslaved and beholden, who murdered us and raped or mothers, sisters and daughters, only reveals the immeasurable distance between us. The freedoms and benefits that you celebrate and revel in are not shared by us. This grand heritage that Agent Orange likes to use to rally you in your patriotic spirit and encourage your pride in your white privilege and your inherited sense of justice, liberty, prosperity, and independence created by your forefathers, engineered exclusively for you, not us, doesn’t have anything to do with black people.

The dawn of this country that brought your ancestors life, liberty, prosperity, healing and the pursuit of happiness, which you inherited, has brought nothing but death, enslavement, stagnation, injury and the receipt of sorrow to ours. This is what black people inherited from your Independence. Independence Day, or the 4th of July, belongs to you, not us. Its very nature is to honor and reflect your independence and continued prosperity. It’s even written into the National Anthem your ancestors wrote. While you go about in your celebration of your heritage and legacies while you reflect and rejoice on what makes this anniversary of your ancestor’s independence so great, black people will mourn and remember our ancestors who were excluded, enslaved, murdered, raped and forced to build your ancestors freedom and wealth, while suffering inhuman atrocities for their wages. To expect black people to have the same exuberance and share in the joyous celebration of a country which enslaved our ancestors, murdered our people, raped our women and devalued our lives, is a mockery and self serving irony.

Is this what freedom truly means to you?

So, what does Independence Day mean to Black People? It means once a year, there is a day that speaks to us, more than any other day of the year, and reminds us of the gross injustices, cruelty, disrespect, and murderous intentions which we, even to this day, constantly endure. To us, your celebration is a joke, a blatant back-handed slap in our faces, which boosts of the sacred liberty and freedoms you ancestors denied ours, their unholy and inhuman license to indiscriminately degradate, inflict innumerable inequities against, and to murder them. Your swell of pride in your national greatness, your vanity in your European aesthetic, your questioning of our right to exist and partake in everyday activities, are a cruel and heartless reminder of our dark past and tormented present. Your denunciation of tyrants, which your ancestors in turn were to ours, a tradition far too many of you continue today with your emboldened impudence and stark arrogance, your rejoicing cries of liberty and equality, which are nothing but hypocritical and self-serving platitudes used to quell our pain and anger and insulate yourselves from the truth and your own moral fragility. Your prayers, songs, sermons of patriotism, with an accompaniment of religious reflections, parades and faux solidarity, are to us simply more bombast, fraud, deception, deflection, absolvement, impiety, and hypocrisy which we’ve all heard before. Your speeches of unity and celebration of this country and its ideals, are a thin veil used to cover up crimes and inequities that were inflicted on our ancestors and upon us still to this day. No other nation on this planet has a more shocking and bloody history of disdain, violence and persecution against us than the United States.

I ask that you take careful heed of what is written here, and ponder the words with earnest. At a time like this, in the United States, where murder, violence and hatred aimed at us, runs rampant in our streets, it is most important that we reflect upon the ills in this nation and seek cures to them post haste. We must allow the scorching irony be heard, so that it may be the convincing argument that wakes you up to our plight. Today, we must speak words of action, be they filled with rallying ridicule, concentrated criticism, scathing sarcasm, and/or righteous rebellion. We must move forth and be the tempest of truth to the world, our voices must be heard. The laws of this nation must be amended, its conscience roused and a dialogue engaged, to uncover the true nature of its antiquated propriety. The great hypocrisy of the United States must be exposed and acknowledged,  just as the crimes against our ancestors and ourselves must be proclaimed and denounced. For if this is not done, we will NEVER have a seat at the table of freedom and liberty, and forever be denied our basic human rights in this country. WE MUST FORCE CHANGE, AND KEEP THE MOMENTUM, OUR TIME IS NOW! 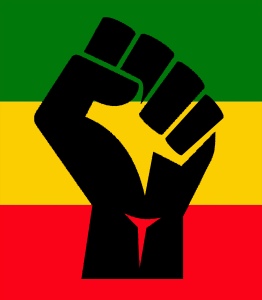 John F. Allen is an American writer born in Indianapolis, IN. He is a founding member of The Speculative Fiction Guild and the Indiana Writers Center. John began writing stories as early as the second grade and has pursued most forms of writing at some point, throughout his career. John studied Liberal Arts at IUPUI with a focus in Creative Writing, received an honorable discharge from the United States Air Force and is a current member of the American Legion. John's debut novel, The God Killers, Book I of the Ivory Blaque series was published in the Summer of 2013 by Seventh Star Press, as well as the Codename: Knight Ranger series, Books I & II. He also has published short stories in several anthologies including: Thunder on the Battlefield, Vol I, also by Seventh Star Press and In The Bloodstream, by Mocha Memoirs Press, The Adventures of Star Blazer, by Hydra Publications and the forthcoming, Bronzeville Blues, by Pro Se Productions. John currently resides in Indianapolis, Indiana. View more posts